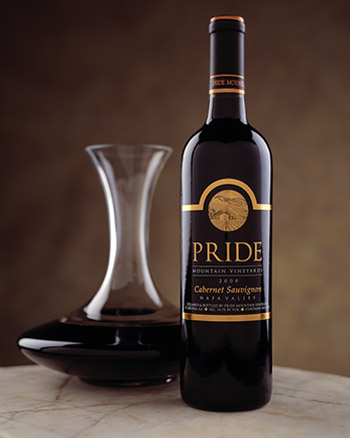 What can we say about a Cabernet of this caliber? It is quite simply the best wine Bob Foley has ever made. Robert Parker called it a “showstopper” when he visited the winery and tasted it from barrel. The Wine Spectator loved it – James Laube gave the barrel sample he requested a 95-100 point score on the Spectator’s website last year. Even those of us watching the progress of this wine from vine to barrel to bottle are simply stunned by what is now in the glass. Readily compared to the 1997 and 1999 vintages, the 2001 Pride Cabernet Sauvignon is raising the bar for world class Cabernets.

“The depth of color in the 2001 Cabernet is amazing – opaque, purple and inky. Leggy as can be, intoxicatingly dark fruit aromas of currant, cassis and crushed dried herbs enchant the nose, while ripe blackberry flavors explode in the mouth. The tannins are remarkably easygoing and spread evenly across the palate, resolving in a finish that lasts even longer in memory than it does on the tongue.”