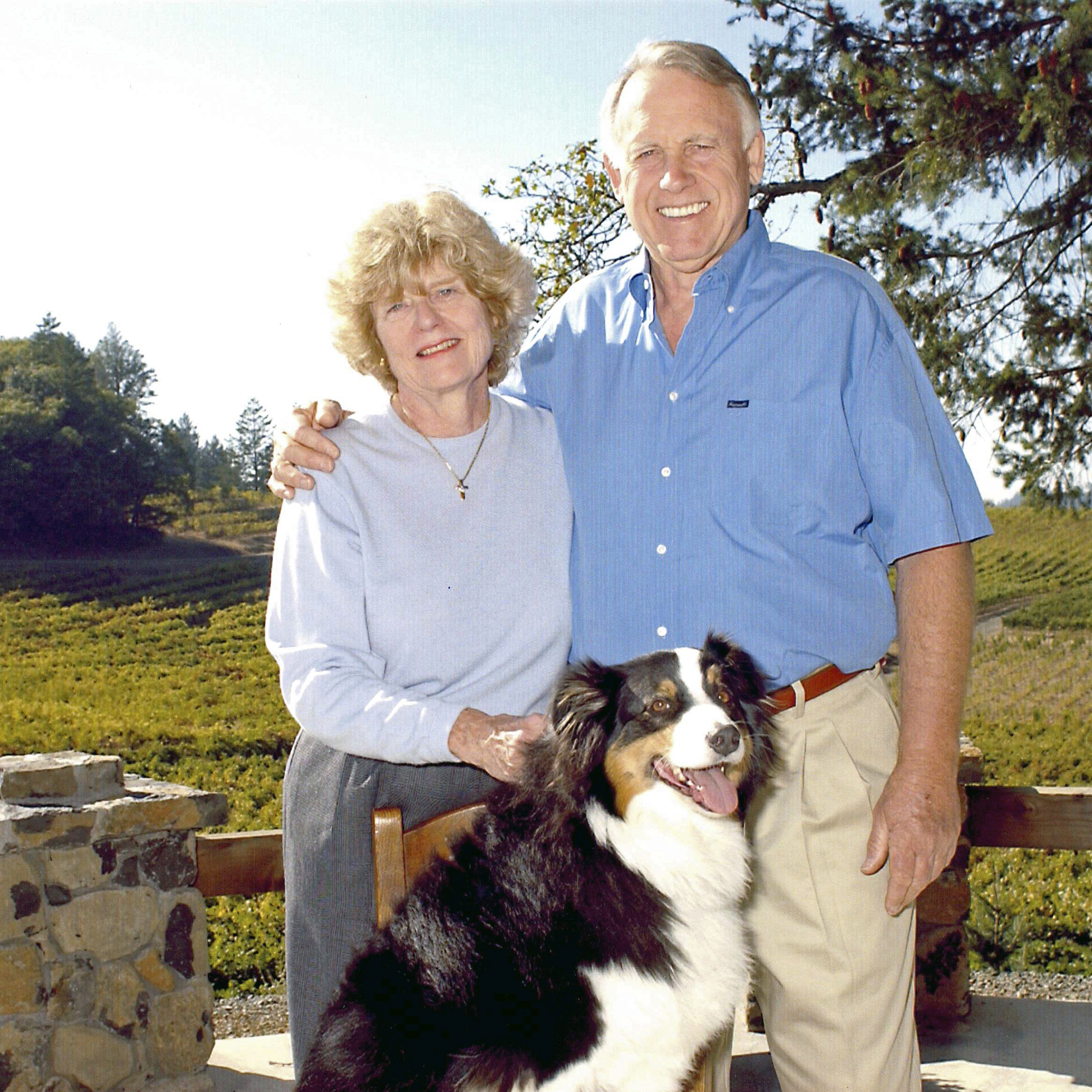 Jim and I met in our junior year at Chico High School.  We graduated in 1954 and each pursued our own college careers.  For Jim, it was dentistry at Loyola College of Dentistry in Chicago and for me, it was elementary education at UC Berkeley.  Separated by over 2,000 miles, we became very familiar with the old adage “absence makes the heart grow fonder.”

After I graduated from Cal, we married and moved to Chicago while Jim finished dental school.  Next came the Air Force, and then finally settling down with our two children in a small Sacramento Valley town near our parents.  We loved living in Colusa County and took many trips over the hill to visit Napa Valley wine country on weekends.  After six years we moved to Marin County.   Jim was by this time on the faculty of the University of the Pacific School of Dentistry in San Francisco.  As an Assistant Dean, he oversaw the Student Clinic and had many additional responsibilities including working at the City Jail, working with the Native Americans on reservations in California and Nevada and establishing community dental clinics.

In 1974, Jim left his faculty position to start a private business teaching dentists how to manage and build their dental practices.  This business eventually became known throughout the world as The Pride Institute and Jim established many innovations and practices for the dental management industry that are still in wide use today.

In the late 1980s, with our daughter and son raised and what we thought of as retirement approaching, we decided that having a little vineyard and selling grapes to local wineries would be perfect.  Neither of us ever dreamed this idea would turn into a world-class winery of our own!

We found a wonderful site known as Historic Summit Ranch at the crest of the Mayacamas Mountains in December 1989 and signed on the dotted line just after the first of the year.  It was spectacularly beautiful and very unique in that the Napa/Sonoma county line ran down the middle.  The ranch needed a lot of work, and being hard workers, we were sure this was something we could do on the weekends.  We quickly realized just how big this job was though, and in addition, we’d decided to farm the grapes ourselves.  Soon it became very apparent that I needed to stay at the ranch 24/7 to keep things rolling while Jim continued his Pride Institute work.  He would travel and teach all week and often not arrive back at the ranch until close to midnight on a Saturday.  But he was up early the next morning planning all the vineyard development that needed to occur.

This is where the adventure really begins!

I went to the UC Davis bookstore at Jim’s request and bought one of every textbook currently being used in the various viticulture classes. Overnight we had a wine library! And Jim read every single one of those textbooks cover to cover.

I always laugh when I say our first retail customers were the dentists of America.  Jim would close classes and lectures by telling a little bit about our “retirement venture.” He’d say that if anyone in the audience might like a bottle or two of PRIDE, which was only $20 retail, his wife would surely be smiling when he got home.  And smile I did!

We drilled wells, planted vineyards, hired staff, built a winery, dug caves, paved roads, and built barns; just as one improvement was finished, the next would begin.

As the property grew, so did our reputation.  Our incredible staff had grasped our concept and each day seemed to be better than the last.  When we first began welcoming guests to the winery in 1998, I’d listen from my office in the back – it sounded like the most wonderful cocktail party!

Then in 2004, we lost Jim to cancer.  Our wonderful children stepped up – our loyal staff stood strong – and we truly became a Family Winery.  Jim and I may have had the initial vision and gotten us off the ground, but our second and third generations – along with our incredible employees - are the heroes today!

We have been blessed indeed.