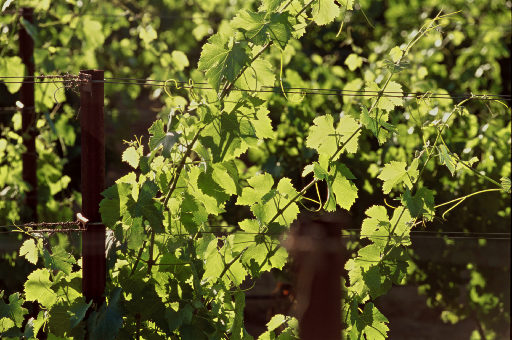 The rollercoaster ride of the 2007 harvest has finally come to an end! Budbreak was early this year with a warm spring that protected the vines from frost damage. Fruit set was perfect, which is key for us to get ripeness. By September, we were poised for an early and very ripe harvest. Leading up to the picking of the first grapes, predictions were for a Thanksgiving spent eating turkey, not pumping over vats of fermenting must, but there were a few surprises in store for us along the way!

Our first pick of the season, the Lower Mountain Top Viognier block, seemed to confirm these expectations, coming in on September 19th with ripe, spicy flavors and perfect acid balance. But from that point on, it was a whirlwind of weather from hot to cold, from sunny to cloudy, and the dreaded appearance of a week-long rain storm during what would otherwise have been the busiest point in our harvest. The quality of the ferments has been excellent, but the season was a nail-biter that added more than one grey hair to the heads of our Production team.

Our Viticultural Consultant, Paul Skinner, described this harvest best when he said that it was “three harvests in one.” The “first harvest” was the initial, early harvest during the last two weeks of September, when we picked perfectly ripe Viognier and Chardonnay, with flavors bursting from golden berries and crunchy, brown seeds. As September wound to a close, the weather cooled, and we waited with empty fermenters as our red grapes stubbornly refused to ripen. Tasting the blocks each day, we wondered if the flavors would ever reach the level of concentration that we hoped for. Our early harvest was turning into an average one, not particularly early but not late either (although “late” has a different definition for us up here on Spring Mountain). Suddenly, on October 4th, the Syrah berries transitioned almost overnight from fruity/sweet to jammy, exotic and seductive! Finally, we were ready to pick our first red grapes of the season. Syrah was followed by several Merlot blocks and even one superb Cabernet Sauvignon from our terraced, rocky Canyon Ranch block.

The “first harvest” concluded by mid-October, with only about 25% of our grapes picked. From there, we faced a few days of off-and-on showers and were disappointed to taste the flavors in our remaining Merlot and Cabernet Sauvignon blocks going backwards. We waited anxiously, hoping the flavors would return, and our patience was tested as weather reports suggested that we might not get any more sunshine or dry weather. The risk of bunch rot and mold was extremely high, so we sent our vineyard crew into the fields to do a second round of leaf-pulling, hoping to take advantage of any sunshine that managed to squeeze through the clouds. Our valley-floor winery friends were finishing their harvest, but Spring Mountain grapes needed more time, and we weren’t sure we would get it. More rain arrived, and the flavors went backwards again. The “second harvest” was a period of inactivity and anxiety punctuated by the occasional picking of the rare block of grapes (our Sangiovese, our Wind Whistle Merlot) that reached full flavor development despite the cool, cloudy weather.

Finally, the “third harvest” arrived! Indian summer! The end of October and the beginning of November greeted us with sunshine, blue skies and temperatures in the high 70’s to low 80’s. With 70% of our grapes still on the vines, we couldn’t have been happier. We waited patiently through the first three days of heat and sunshine to let our vines soak it up, and slowly the flavors began to transform. Finally, ripeness was reached! We picked the remaining Cabernet Sauvignon, Merlot, Cabernet Franc and Petit Verdot blocks one by one as they ripened, culminating in the picking of our Rock Arch Reserve Cabernet Sauvignon block on November 7th and 8th. We are happy to trade our newly-grey hairs and our Thanksgiving pump-overs for the concentrated, inky-black and jammy character of our young 2007 wines. As we now begin to rack the wines from barrel to barrel, we can look back on the harvest and say that it was a good one… and we are almost ready to start thinking about the next one…