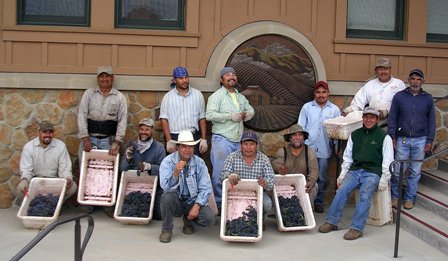 With weary bodies but upbeat spirit, our vineyard crew paused for a photo after picking the last grapes from our Rock Arch Reserve Cabernet Sauvignon vineyard on Thursday October 30th. The crew had more than earned their moment of rest after this year’s harvest, as uneven fruit ripening conditions required multiple picks of each vineyard block.

2008 presented us with exceptionally low yields (less than one ton per acre in some blocks) and exceptionally high quality – but we sure had to work to get it. The low yields resulted from our worst freeze ever in late April and unusually hot and windy conditions at fruit set which resulted in only a fraction of the usual number of berries being pollinated. Uneven ripening began with the uneven fruit set and was exacerbated by temperature extremes during veraison, when ripening began. Our solution was to pick each block as many as three times, instructing our experienced vineyard crew to pick just the clusters that were fully ripe on each pass through the blocks. The resulting wines display a range of flavors, from luscious red fruit through jammy black fruit, coffee and cocoa. We expect 2008 to be similar to 2001, 2002 and 2006, some of our ripest, most expressive vintages.

Hours after picking the last grapes from our ranch on Thursday October 30, the skies clouded over and the rain began to fall. Now that our 2008 harvest is over, the rains are both welcome and much needed, as our soils soak up the moisture that will provide sustenance to our 2009 vintage.